Welcome to the Weekly Well-Being Connection! Each week we will share advice from our clinical experts on ways to care for your mental health and well-being throughout COVID-19.

We are excited to have Colorado Spirit Counselors, Samaria Neely and Chelsea Nibert, writing this week’s post. Thank you both!

Throughout the course of the pandemic, racial disparities and health care inequity have been at play. As our communities move into vaccine distribution, the Colorado Spirit team continues to discuss health care equity and how we can contribute to equity and make sure our supports are widely available.

We are engaging in conversations and frequent brainstorming sessions, discussing how systems contribute to health care inequities. In honor of Black History Month, we sadly acknowledge that most US history classes spend a very small percent of time covering Black history. In 2015, a study from the National Museum of African American History and Culture and Oberg Research found that on average, only 8-9% of history education in U.S. schools is devoted to Black history. African American history is grossly underrepresented, and the information taught is often skewed or misrepresented. We have a long way to go to repair the education system to adequately represent African American history.

Black History Month is a perfect time to celebrate all of the wins that have come out of the black community over the years. The strife and struggle that people of color have undergone must be honored by highlighting the successes that have propelled our nation forward due to the various discoveries, inventions and contributions of the Black community.

Below, we recognize a series of Black History facts that should have been taught in school.

One of the things we talk about in the Colorado Spirit team is, “What next?” We would like to invite you to take action. Talk about this. Give tribute to these impacts. Stay informed and eager to learn about the ongoing contributions that continue to mold our world and future generations. It is our civic duty as Americans to ensure that these successes are taught to and celebrated by future generations. 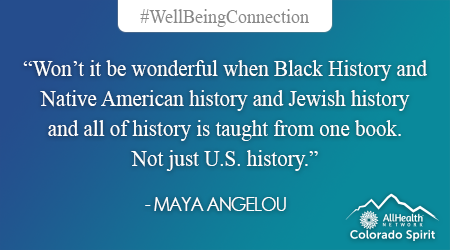 Cultivating this appreciation and understanding in our youth helps promote an equitable and inclusive future for all.

See the resources below for more information on how to educate ourselves and our peers on the ongoing impacts of the Black community not just in February but, every day out of the year.

We know learning about Black history is not enough to address health care inequities, and we hope that sharing information and getting conversations going is a small step.

Would speaking to someone help?

To speak with someone in the Colorado Spirit Program about stress related to the pandemic, please call 720-707-6789 or visit our web page at www.allhealthnetwork.org/Colorado-Spirit.

AllHealth Network is continuing to provide service via telehealth or by phone and our Crisis Walk-in Center remains open 24/7. To learn more about what other community mental health centers are doing, please visit The Colorado Behavioral Health Council COVID-19 website.

If you are experiencing a mental health crisis and are in need of immediate assistance, please call the Colorado Crisis Hotline at 1-844-493-TALK (8255) or text TALK to 38255.